This article shows few of many great Astrophysical secrets hidden in the God’s adjuration by the locations and positions of the stars.  God says:

[Furthermore I swear by The positions of the Stars,- And that is indeed A mighty adjuration If ye but knew,- That is indeed A Qur-an most honourable] (S. . 75-77).

ALLAH swears by the positions of the Stars. The implications of this swear are manifested through mentioning some of the physical complications encountered in the calculations of positions and distances to stars.

Distance measures are used in physical cosmology to give a natural notion of the distance between two objects or events in the universe. They are often used to tie some observable quantity (such as the luminosity of a distant quasar, the redshift of a distant galaxy, or the angular size of the acoustic peaks in the CMB power spectrum) to another quantity that is not directly observable, but is more convenient for calculations (such as the comoving coordinates of the quasar, galaxy, etc). The distance measures discussed here all reduce to the naïve notion of Euclidean distance at low redshift.

In accord with our present understanding of cosmology, these measures are calculated within the context of general relativity, where the Friedmann-Robertson-Walker solution is used to describe the universe. 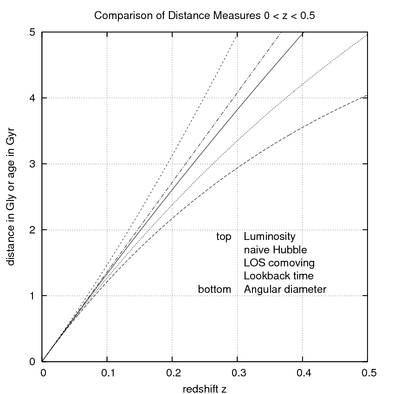 A comparison of cosmological distance measures, from redshift zero to redshift of 0.5. The background cosmology is Hubble parameter 72 km/s/Mpc, Omega_lambda = 0.732, Omega_matter = 0.266, Omega_radiation = 0.266/3454, and Omega_k chosen so that the sum of Omega parameters is one.

The latter three are related by:

where z is the redshift.

If and only if the curvature is zero, then proper motion distance and comoving distance are identical, i.e. dpm = χ.

while for positive curvature,

where RC is the (absolute value of the) radius of curvature.

A practical formula for numerically integrating dp to a redshift z for arbitrary values of the matter density parameter Ωm, the cosmological constant ΩΛ, and the quintessence parameter w is 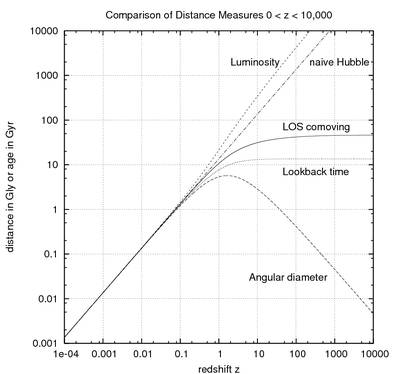 A comparison of cosmological distance measures, from redshift zero to redshift of 10,000, corresponding to the epoch of matter/radiation equality. The background cosmology is Hubble parameter 72 km/s/Mpc, Omega_lambda = 0.732, Omega_matter = 0.266, Omega_radiation = 0.266/3454, and Omega_k chosen so that the sum of Omega parameters is one.

where c is the speed of light and H0 is the Hubble constant.

By using sin and sinh functions, proper motion distance dpm can be obtained from dp.

Comoving distance is the distance between two points measured along a path defined at the present cosmological time. For objects moving with the Hubble flow, it is deemed to remain constant in time. The comoving distance from an observer to a distant object (e.g. galaxy) can be computed by the following formula:

Despite being an integral over time, this does give the distance that would be measured by a hypothetical tape measure at fixed time t. For a derivation see (Davis and Lineweaver, 2003) "standard relativistic definitions". 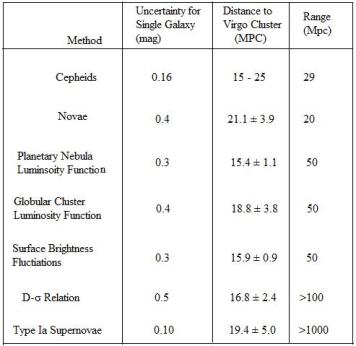 The extragalactic distance scale is a series of techniques used today by astronomers to determine the distance of cosmological bodies beyond our own galaxy, which are not easily obtained with traditional methods. Some procedures utilize properties of these objects, such as stars, globular clusters, nebulae, and galaxies as a whole. Other methods are based more on the statistics and probabilities of things such as entire galaxy clusters.

Discovered in 1956 by Olin Wilson and M.K. Vainu Bappu, The Wilson-Bappu Effect utilizes the effect known as spectroscopic parallax. Certain stars have features in their emission/absorption spectra allowing relatively easy absolute magnitude calculation. Certain spectral lines are directly related to an object's magnitude, such as the K absorption line of calcium. Distance to the star can be calculated from magnitude by the distance modulus:

Though in theory this method has the ability to provide reliable distance calculations to stars roughly 7 megaparsecs (Mpc) away, it is generally only used for stars hundreds of kiloparsecs (kpc) away.

This method is only valid for stars over 15 magnitudes.

Beyond the reach of the Wilson-Bappu effect, the next method relies on the period-luminosity relation of Cepheid variable stars, first discovered by Henrietta Leavitt. The following Cepheid relations can be used to calculate the distance to Galactic and extragalactic Cepheids:

The use of Cepheid variable stars is not without its problems however. The largest source of error with Cepheids as standard candles is the possibility that the period-luminosity relation is affected by metallicity. For Galactic use only, the following relation is also valid in addition to those highlighted above:

Cepheid variable stars were the key instrument in Edwin Hubble’s 1923 conclusion that M31 (Andromeda) was an external galaxy, as opposed to a smaller nebula within the Milky Way. He was able to calculate the distance of M31 to 285 Kpc, today’s value being 770 Kpc.

As detected thus far, NGC spiral galaxy in the constellation Leo, contains the farthest Cepheids yet found at a distance of 29 Mpc. Cepheid variable stars are in no way perfect distance markers: at nearby galaxies they have an error of about 7% and up to a 15% error for the most distant. 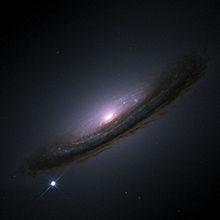 There are several different methods for which supernovae can be used to measure extragalactic distances, here we cover the most used.

We can assume that a supernova expands spherically symmetric. If the supernova is close enough such that we can measure the angular extent, θ(t), of its photosphere, we can use the equation

Where ω is angular velocity, θ is angular extent. In order to get an accurate measurement, it is necessary to make two observations separated by time Δt. Subsequently, we can use

Where d is the distance to the SN, Vej is the supernova's ejecta's radial velocity (it can be assumed that Vej equals Vθ if spherically symmetric).

This method works only if the supernova is close enough to be able to measure accurately the photosphere. Similarly, the expanding shell of gas is in fact not perfectly spherical nor a perfect blackbody. Also interstellar extinction can hinder the accurate measurements of the photosphere. This problem is further exacerbated by core-collapse supernova. All of these factors contribute to the distance error of up to 25%.

SN are some of the best ways to determine extragalactic distances. Ia's occur when a binary white dwarf star begins to accrete matter from its companion Red Dwarf star. As the white dwarf gains matter, eventually it reaches its Chandrasekhar Limit of

. Once reached, the star becomes unstable and undergoes a runaway nuclear fusion reaction. Because all Type Ia SN explode at about the same mass, their absolute magnitudes are all the same. This makes them very useful as standard candles. All type Ia SN have a standard blue and visual magnitude of

Therefore, when observing a type Ia SN, if it is possible to determine what its peak magnitude was, then its distance can be calculated. It is not intrinsically necessary to capture the SN directly at its peak magnitude; using the multicolor light curve method (MCLS), the shape of the light curve (taken at any reasonable time after the initial explosion) is compared to a family of parameterized curves that will determine the absolute magnitude at the maximum brightness. This method also takes into effect interstellar extinction/dimming from dust and gas.

Similarly, the stretch method fits the particular SN magnitude light curves to a template light curve. This template, as opposed to being several light curves at different wavelengths (MCLS) is just a single light curve that has been stretched (or compressed) in time. By using this Stretch Factor, the peak magnitude can be determined.

Using Type Ia SN is one of the most accurate methods, particularly since SN explosions can be visible at great distances (their luminosities rival that of the galaxy in which they are situated), much farther than Cepheid Variables (500 times farther). Much time has been devoted to the refining of this method. The current uncertainty approaches a mere 5%, corresponding to an uncertainty of just 0.1 magnitudes.

Novae can be used in much the same way as supernovae to derive extragalactic distances. There is a direct relation between a nova's max magnitude and the time for its visible light to decline by two magnitudes. This relation is shown to be:

is the time derivative of the nova's mag, describing the average rate of decline over the first 2 magnitudes.

After novae fade, they are about as bright as the most luminous Cepheid Variable stars, therefore both these techniques have about the same max distance: ~ 20 Mpc. The error in this method produces an uncertainty in magnitude of about ± 0.4

Based on the method of comparing the luminosities of globular clusters (located in galactic halos) from distant galaxies to that of the Virgo cluster, the globular cluster luminosity function carries an uncertainty of distance of about 20% (or .4 magnitudes).

astronomer William Alvin Baum first attempted to use globular clusters to measure distant elliptical galaxies. He compared the brightest globular clusters in Virgo A galaxy with those in Andromeda, assuming the luminosities of the clusters were the same in both. Knowing the distance to Andromeda, has assumed a direct correlation and estimated Virgo A’s distance.

Baum used just a single globular cluster, but individual formations are often poor standard candles. Canadian astronomer Racine assumed the use of the globular cluster luminosity function (GCLF) would lead to a better approximation. The number of globular clusters as a function of magnitude given by:

Where m0 is the turnover magnitude, and M0 the magnitude of the Virgo cluster, sigma the dispersion ~ 1.4 mag.

It is important to remember that it is assumed that globular clusters all have roughly the same luminosities within the universe. There is no universal globular cluster luminosity function that applies to all galaxies.

Like the GCLF method, a similar numerical analysis can be used for planetary nebulae (note the use of more than one!) within far off galaxies. The planetary nebula luminosity function (PNLF) was first proposed in the late 1970’s by Holland Cole and David Jenner. They suggested that all planetary nebulae might all have similar maximum intrinsic brightness, now calculated to be M = -4.53. This would therefore make them potential standard candles for determining extragalactic distances.

Where N(M) is number of planetary nebula, having absolute magnitude M. M* is equal to the nebula with the brightest magnitude. 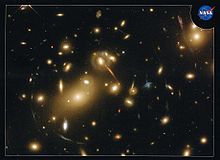 The following method deals with the overall inherent properties of galaxies. These methods, though with varying error percentages, have the ability to make distance estimates beyond 100 Mpc, though it is usually applied more locally.

The surface brightness fluctuation (SBF) method takes advantage of the use of CCD cameras on telescopes. Because of spatial fluctuations in a galaxy’s surface brightness, some pixels on these cameras will pick up more stars than others. However, as distance increases the picture will become increasingly smoother. Analysis of this describes a magnitude of the pixel-to-pixel variation, which is directly related to a galaxy’s distance.

The D- σ relation, used in elliptical galaxies, relates the angular diameter (D) of the galaxy to its velocity dispersion. It is important to describe exactly what D represents in order to have a more fitting understanding of this method. It is, more precisely, the galaxy’s angular diameter out to the surface brightness level of 20.75 B-mag arcsec − 2. This surface brightness is independent of the galaxy’s actual distance from us. Instead, D is inversely proportional to the galaxy’s distance, represented as d. So instead of this relation imploring standard candles, instead D provides a standard ruler. This relation between D and σ is

Where C is a constant which depends on the distance to the galaxy clusters.

This method has the possibility of become one of the strongest methods of galactic distance calculators, perhaps exceeding the range of even the Tully-Fisher method. As of today, however, elliptical galaxies aren’t bright enough to provide a calibration for this method through the use of techniques such as Cepheids. So instead calibration is done using more crude methods.